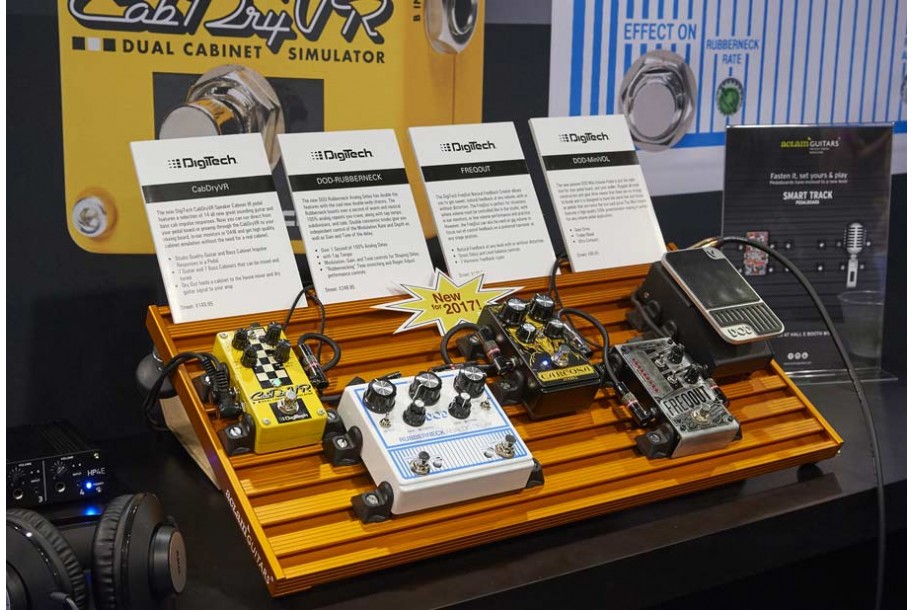 During the 2017 winter NAMM Show, Aclam Guitars has had an important presence collaborating with other brands as well. Of course, for the fifth year, Smart Track pedal board with its patented Fasteners system to hold pedals without Velcro® or adhesives has had a significant relevance.

For the occasion, some effects pedals brands took part of our giant pedalboard display made from scratch with Smart Track pedal boards; including the American brand Digitech, which had its own booth in NAMM and was displaying in pedalboards based on the Fasteners system their new releases.

CabdryVR: the perfect solution for anyone who uses either an amplifier emulator or a DAW during live performances. This pedal offers 14 IR’s of classic guitar and bass displays plus two independent mono outputs, which makes it very handy for working either with two instruments at the same time or in stereo.

FreqOut: the ultimate pedal for feedback lovers. A natural harmonics generator of the note which we are playing with our guitar. And it goes much further: it allows to decide what range of the harmonic we want to reinforce. This pedal will undoubtedly become indispensable for anyone who is looking for a creative, different and original tool.

Digitech
Unquestionably, the history of music would not be the same without Digitech: artists as different as Tom Morello, Steve Vai, Nels Cline or Johnny Greenwood (Radiohead) have ithis brand in their sets, which became famous with the Whammy design in 1989.

Digitech has been innovating since then during its almost 30 years of existence and are constantly launching new and surprising proposals. Among them we find the JammMan looper and more recently the Trio (a generator of bass and drums based on what is played with the guitar). All of this in addition to the FreqOut (feedback pedal) and the CabDryVR (simulator for bass and guitar based on IR’s).

Not surprisingly, every musician who has ever worked in a professional environment has used Digitech at some point.