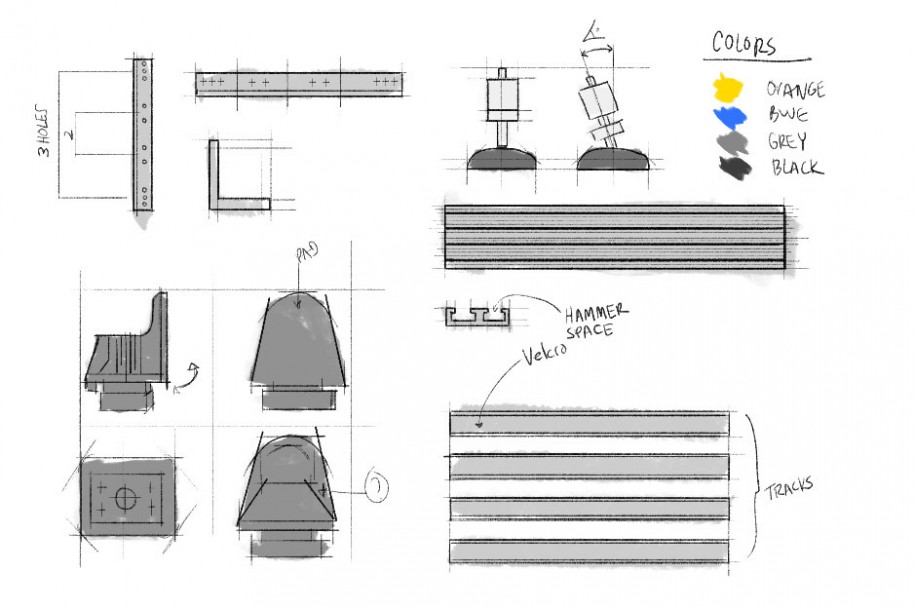 The evolution of Aclam’s custom pedalboards

The beginning of a guitar & bass modular pedalboard

Aclam’s first effort in the fascinating world of supports for effects pedals. If you don’t remember this pedalboard or haven’t had the chance to see one in person, we can tell you it was one of the few modular pedalboards in the market back then. This feature would become an inalterable concept that has been present since then, even after evolving our pedalboards to our current offer.

A huge range of accessories to make your pedalboard bigger and bigger were available. The possibility of customization made them really interesting and we saw people experimenting with pedalboards as they were playing Lego®.

But wait... if everything seemed just on the right way, why this pedalboard does not exist anymore? Keep reading!

A new way to attach your pedals - a reliable velcro alternative pedalboard!

After experiencing a setback with our Modular Track pedalboards due to a surprising patent infringement in the US (surprise! This empty spaces can be patented…), we had to rethink the concept, finding ways to come out with something innovative that could be easily distinguished from the vast number of options available in the market.

Ok, we had a problem: NAMM was coming in a month and we were not allowed to present the products. We had to turn the tables!!! So we literally did it: We turned over the pedalboard tracks!

It didn’t take much time to realize one of the factors that was present in all the pedalboards back then, the election of Velcro® to attach pedals to the board. So that meant it was the moment to offer a reliable alternative to the way you fasten pedals to the pedalboard.

The tracks of the modular track had some grooves at the bottom part to help the user mount the pedalboard, so when we turned them over, we had some grooves at the top part. We just needed to add a t-slot system that worked with those tracks and that neat idea would develop into what today we all know as “Smart Track® pedalboard”! A system where pedals could live free from nasty adhesives and devaluating alterations: your pedals remain clean.

So in 2014, we finally we went to the NAMM Show 2014 with some of the very first prototypes of the Smart Track® pedalboard and some lighted Modular Tracks.

Adding up to the new pedal fastening system and the modularity, we threw in an extra concept: reversibility! What if the player could choose between using Velcro® or using this new fastening system?

The pedalboard had to be redesigned and with a reversible track, allowing the musician to choose between a side designed for the new attachment system, and the reverse, which could accommodate Velcro® strips for those stuck to that system. As the founder Jordi Canivell says: “Always look at the right side of the track!”

This reversible pedalboard had slowly become a reality, but for some time they were going to be called Bandit® and Rebel®, fancy that! We eventually decided to go for a less bellicose name and stick to Smart Track® and Evo Track®, but we had enough time to publish some advertisements with those old names! Check them out!

Oh yes… we almost forgot that Bandit worked with suction pads! (Believe us, we have tried almost everything. Also the “u” shaped fasteners :))

We spent some months developing new profiles, meeting with professionals and musicians until and we had the first bunch of this new concept of pedalboards produced on the summer of 2015.

Fastening an MXR to a Smart Track pedalboard.

Velcro in one side of the track & fasteners on the other one!

All pedalboards in one

Not happy with all the previous achievements (we are never happy) in 2017 we kept on developing new features for our pedalboards, fueled by eager users that would bombard us in a weekly basis with pictures of their own “Frankenstein pedalboards”. They were actually combining parts and achieving setups we had never even imagined. Many pedalboard accessories ideas have been born from feedback of our proactive customers, which is awesome as none of them have requested compensations, you know who you are!

During this period, we started to work on a combination of both attachment systems in one pedalboard, combining both methods in one track would broaden user options, which is much better than limiting them! The resulting board would still have to be modular, smart and reversible, but it would add additional customization options, just like those construction games we all love!

Welcome to the Aclam’s pedalboard system!

The most common question we had to deal with was the reason for the pedalboard not having holes/spaces in it. Well, if you have read up to here you already know, for the same reason we had to rethink the Modular Track, empty spaces can be patented, and somebody already did in the US. We could write a book about all this, but all we will say is that we had to think how to turn a disadvantage into an advantage, helping us to evolve to make the best of a not so favorable situation.

We had the chance to solve this issue for all non US costumers (sorry americans ☹) So after a year of hard work and many new projects (we have also begun to produce effects pedals!), in 2019 we finally completed a pedalboard system that would allow you to design your own and unique pedalboard. Meet your needs and customize your pedalboard as much as you want!

Here you have an example of 6 different options for a same size of a pedalboard:

With three different tracks, many side lengths, two ways to attach your pedals and many accessories to customize your pedalboard, you have almost an infinite catalogue of pedalboards waiting for you to decide which is yours!

Summary table with all possible dimensions for Aclam custom pedalboards

To make it easier for you, we have some standard and pre-defined pedalboards you can find at our online store.

Anyway, we are aware that some of you have a geek inside, so it’s your time to explore and play around with the options we provide! Please, we love to see your creations under the hashtag #myrigmyrules in social media!

Read which is the best way to design your custom pedalboard in the following blog entries.

Stay tuned and subscribe to our newsletter to be the first to know!