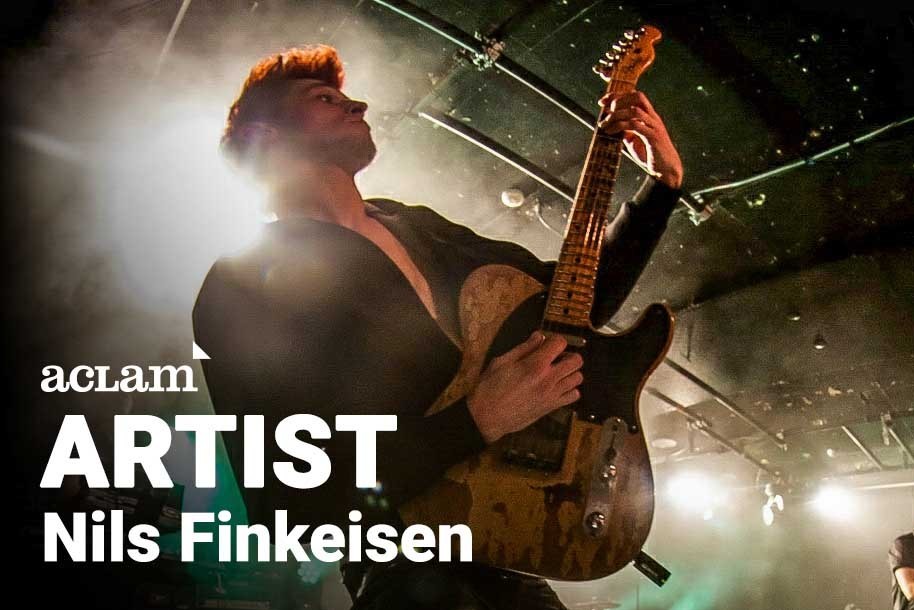 If there was no black album by "Metallica", I probably would not play electric guitar at all.  So they are my initial inspiration, but surely many other bands like "A Perfect Circle", "Porcupine Tree", "Tool", "Pink Floyd", "Katatonia", "Mutemath", "Lamb of God", "Karnivool", "Gojira", "Opeth", "The Mars Volta" and many more, are bigger influences on my playing nowadays.

In my opinion there is nothing like "talent". It is all about your dedication - the time you spend with the instrument.

If you're learning to play the guitar when you are still young, it makes things easier, as you learn faster and have more time to practice a proper eight hours a day.

Well, "Die Krupps" had to cancel several festival shows, a pretty big US tour, a co-headliner tour with some friends here in Europe. Covid 19 is changing the whole industry right now. We will have to wait and see, what happens during 2021 and 2022, I guess. Many small booking agencies and small venues are bankrupt already, but we still only see the top of the iceberg.

I just finished some tracks for a pretty cool international cooperation with Sonny Vincent from "The Testors" - a pretty well known CBGBs seventies proto-punk band. There are really big names playing on the album, but that release is still a secret and I may not talk too much about it yet.

Right now I am doing some re-mixes for other artists and I am testing new stuff like crazy good guitar pickups from Andreas Kloppmann and new products from ENGL amplification.

There is no perfect rig and I like to try out new gear every single show. That's why I use Aclam Smart Track boards!

I is so nice and easy, as you can change your pedals every night on tour if you like, if you have one of these boards. A fantastic product!

I am not a shower singer at all.

That's always up to the listener. I still really love "Marula" by "Eden Circus" as much as I loved it, when we recorded the album in 2013. "Vision 2020 Vision" - the latest "Die Krupps" release is very cool too.

There is no such thing as  a "worst" creation, but I admit, I contributed to some stuff I am not proud of during the early 2000s.

That one is still on top of my bucket list. I heared they have great sucuk in Turkish prisons!

The last concert I attended was the last one I played in December 2019 in in the A38 Hajo in Budepest with "Die Krupps". There is even a recording of that show from the Hungarian TV somewhere in their media centre on https://mediaklikk.hu/.

I am not picky at all, but one can dream... Mike Portnoy would be great. I'd love to play a song with him or two.

As a kid, I always wanted to become a pilot for the German Lufthansa.

Naked boobs in the first row in front of the stage, drunk people entering the stage and try to sing along, well, there have been many strange, funny and awkward situations during the years with some guys and girls in the audience.

I still need to talk about some really irrelevant nonsense with James Hetfield and Kirk Hammett and did not have the chance to meet them in person altough I was playing guitar in "Kingdom Come" and still play guitar in "Die Krupps". Both bands have a certain history with Metallica, but it still did not lead to a meeting with them yet.

That's a tough question. Probably Mutemath's self titled album "Mutemath" or "The Wall" by Pink Floyd".

"Load" by Metallica on the day it was released. A big mistake. *laughs*

During the next weeks I am preparing some stuff for the "Reeperbahn Festival 2020" in Hamburg. This event might be the only trade show or music fair in Germany during the whole year and I am planning to do some clinics for Charvel, BluGuitar, Klotz etc. Also I will be demoing Aclam boards for Sonic Sales (the German distribution for Aclam guitar products) as well and talk about old vintage guitars at the No.1 Guitar Center booth in the musical instruments area during the whole festival.