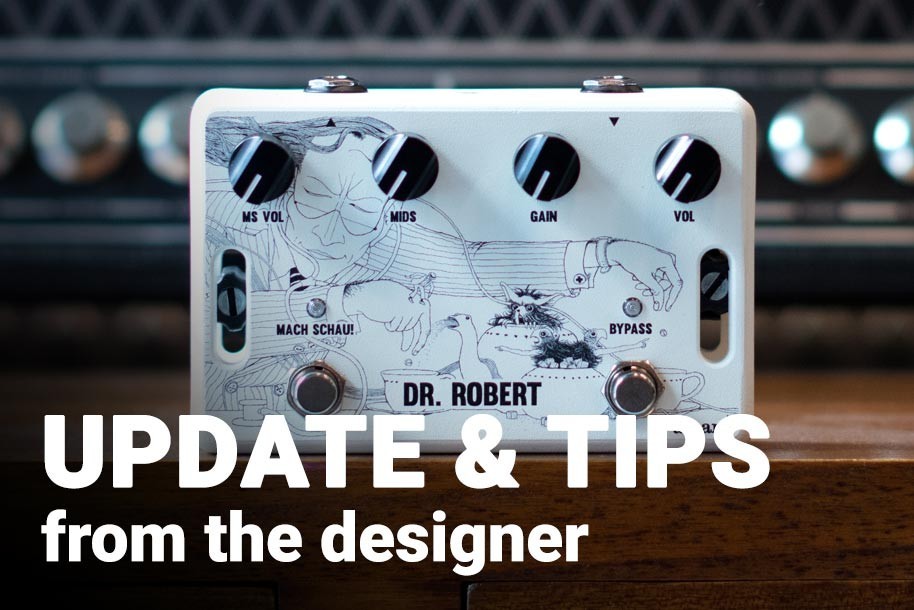 With the Dr. Robert turning a year and a half old, it is time to reveal some tips and fun facts about it. If you already are a proud owner, check out some valuable information to get the most out of it.

Since its debut we have run out of 2 batches of the Dr. Robert and recently we have introduced minor circuit board changes to make it more reliable and versatile.

➡️ We have got rid of the calibration trimmers, so every Dr. Robert is now more consistent than ever!

➡️ We have included a Gain trimmer for the Mach Schau! Section so now you can tweak a little bit its tone and make it less aggressive!

From S/N 1000 onwards all Dr. Roberts are shipped with the new specs, so if you have any doubts regarding which version you have, you can recall its serial number to figure it out!

Here are some tips and curiosities of the Dr. Robert!

One of the simplest ways to get a personal tone is to vary the order of your effect pedal chain. You can make the Dr Robert sound very different depending on where you put it in your pedalboard.

Generally, I would recommend putting it last on your fuzz-distortion-overdrive chain to get a cleaner tone from your modulations and to take advantage of the independent volume of the Mach Schau! section. This way there is no risk of overloading an adjacent saturation device or of limiting the Robert’s great dynamics.

Additionally, you can experiment with its location. Try putting it after the modulation devices (chorus, flanger, vibrato, tremolo, phaser…) and they will be affected by the Robert’s coloring. They can even affect its gain structure.

You can go even further and put it after the delay and reverb! Although it is not the most orthodox way to put a saturation device on the effects chain, this will give you the most “vintage correct” tone in terms of how The Beatles recorded their music.

Vintage amps did not have effects loops of any kind, so every effect the player wanted to use had to be plugged in in front of the amp. This meant, saturation (either created in the preamp or power amp section) was generated after all those effects and more harmonics were added to make them sound richer (sometimes too much).

In fact, the reverb and tremolo effect found on the original Vox UL730 were obviously located before the tube power amp section of the amp (where saturation was generated) and those effects influenced the saturation content and harmonics at high volumes.

Put the Dr. Robert right after all your saturation devices but not after modulation, delay, and reverb pedals.

➡️ You want to sound as vintage and as gritty as possible?

Experiment by shifting the location of the Dr. Robert closer to the last effects or even as the last one so you simulate the way amps were used in the 60’s and 70’s (every pedal in front of the amp).

I WANT TO LEARN MORE!

Not only for guitar or bass

The unique eq found on the Robert makes it a perfect tool to shape new tones for your keyboards, drum machines and other instruments! The Mids control is the heart of the Dr Robert’s tone, it works like a peak filter and affects both gain and frequency spectrum.

Aside from that, if you want to fine tune a particular tone, there’s the Bass and Treble controls inside the Dr. Robert! They both affect the way the circuit saturates so it is crucial to keep this in mind if you start to manipulate them!

This is the most asked question I got on the email! Literally, once a week. Most of you guys have doubts on what is the best amp to pair the Dr. Robert with to get the closest to the Beatles tone.

When designing the Dr. Robert, aside from the original Vox UL730 we had many other amps to test it with.

We concluded that the Dr. Robert has a clear inclination toward British voiced amps with lots of midrange. Any Vox, Orange, Marshall, Hiwatt, and almost any EL34 or EL84 equipped amp will be a great companion for the Robert.

On a personal note, the amp I liked the most was the 65 RI Deluxe Reverb. It has an ideal mix of clarity and midrange and sounds beautiful when paired with the Robert. I recommend trying it if you can!

Now you can control the Mach Schau! gain!

As mentioned before, every Dr. Robert from unit 1000 comes with a dedicated trimmer to set the Mach Schau! gain. This is a fine tune trimmer, so its effect will not be as drastic as the Gain knob found on the outside of the pedal. This way you can make the Mach Schau! less aggressive so the transition between both tones will be gentler and softer... just in case the venue’s manager wants more of a show without turning it into a riot ;).

This was a mod most of you guys requested, so we have included it on the latest revision of the circuit, but it is possible to do it on every Dr. Robert. Just send your pedal back to us and we can mod it, maintaining its warranty. Contact us for further information regarding costs and procedures.

Well, those are the things no one told you about the Dr. Robert! Hope these tips will help you to better understand the Dr. Robert and get more tones out of it!

Best to try and experiment so...