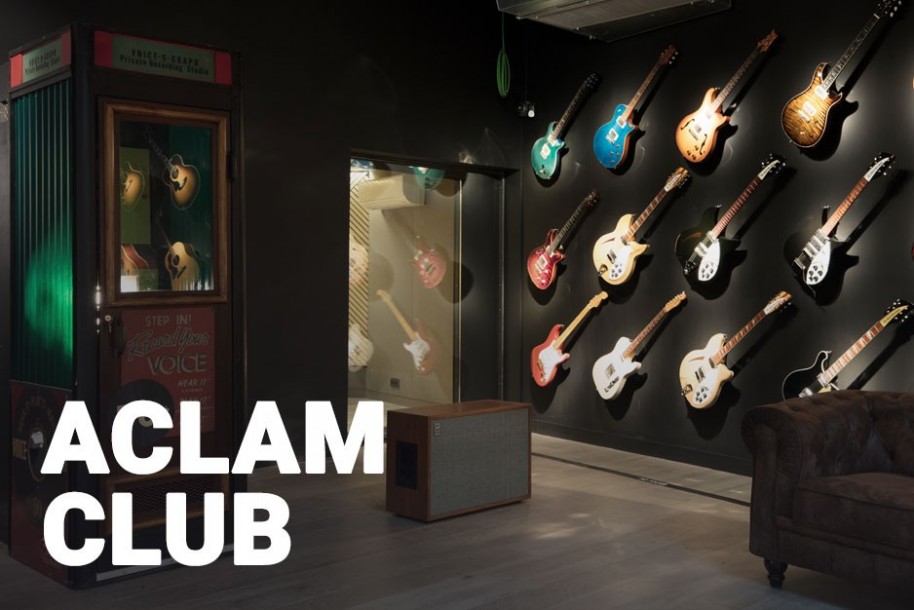 Aclam Club: Probably one of the most interesting guitar collections in Europe

What the heck is this place?

Every guitar aficionado should visit Aclam Club in Barcelona, at least once in a lifetime.

But this is not just about guitars, if you also happen to be a vintage motorcycle connoisseur, a cinema enthusiast or an audiophile, well then, this is your kind of place.

How does it sound to connect with people with similar interests, who share the same passion for music? A place where you can have a drink at a fabulous bar and admire an astonishing guitar collection? Good? Someone would expect a decent number of instruments, but in fact it is a bit more serious than that, about 150 guitars are on display and all of them are remarkable, to say the least.

The space is huge, it is probably one of the most interesting guitar collections in Europe and it’s hard to imagine something so unique elsewhere in the world. Some of these instruments are the finest examples in guitar making, from Spanish luthiers of the 19th and 20th century such as Antonio de Torres, Enrique Garcia or Ignacio Fleta, to the last greatest American luthiers such as D’Angelico, D’Aquisto and Monteleone, only to name a few...

The average guitar collector wants his guitars for his eyes only, but this is not the case with Jordi Canivell, Aclam's CEO and owner of the club. He loves to share the joy of playing these magnificent instruments to other guitar lovers like him. Ultimately, there is the aim to pay tribute to all these great guitar makers and guitarists that have left an invaluable mark in the history of music and modern culture.

To feel the music

Music is taken very seriously and that is why the sound system also matches the high standards of the club. There is a fine selection of vinyl of music of all genres and all eras and every week the club invites a guest to present a record. There you have the chance to listen to the music with powerful quality as you may have not experienced it before.

Located at the back of the stage, the video wall serves equally as a great cinema where concerts and documentaries are played and also as the perfect tool for video art performances.

Don’t think it’s a place where you will just admire fabulous instruments and then go home. Believe it or not, you can actually play most of them. You can choose a guitar, book a suitable time and play it in a private space; or if you are not a shy person, you can play along with your pals while you drink a scotch.

How does it sound? Jolly good to me!

But wait! There is more! What if I tell you that you can record your own song into a 7” vinyl? My goodness! How is that even possible? Well, there is an original American 50’s Voice-O-Graph. Yes! the same type that Neil Young used to record “A letter home” in 2004.

As Young said, “the Voice-O-Graph is a phone booth with one mic to vynil” It results in a “lo-fi analog record”, which Young described as “retro-tech”.

Take it to the limit

If you are a musician or an aficionado, you might like to know there is an analog and a digital recording studio. Which way do you prefer? Fancy recording with a D’Aquisto New Yorker, made for Grant Green and later owned by George Benson? Or maybe you prefer a 1955 Gibson Super 400 with P90?

So, what do you think? Do you want to become a member?

Wait no more and book a date at the Aclam Club.