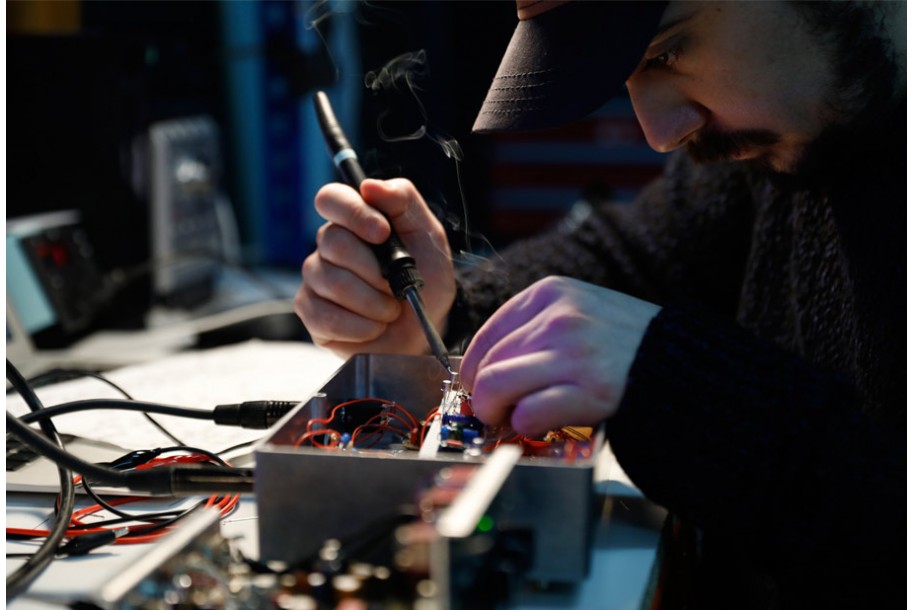 Mi name is Marc Sospedra and I own a guitar, amp and effects pedal repair shop; I play the bass and guitar in some local scene bands and I am a true effect pedal lover.

Even though I have never owned an effect pedal company nor dedicated myself fulltime to pedal building, I have repaired hundreds of them and built custom stompboxes for customers and fellow musicians. I have always been a sixties and seventies classic sound devotee, you know, a guitar directly plugged into a cranked-up amp. That’s why when work started on the design for Aclam’s first overdrive pedal I knew it would have to pay tribute to that period. It was clear that the pedal had to sound like a valve amp, with dynamics and a good crunch.

The design process for the Cinnamon Drive went through several phases before defining it in its entirety. My first approach was to use modest components: FETs and BJTs; but after a couple tests I wasn’t satisfied with the outcome, so I replaced them with Op Amps and a design alternating soft and hard clipping. From the very first moment I wanted the pedal to be the most versatile possible with the least controls; I mean, it is undeniable that many knobs and switches are a total blast, but I consider that an overdrive pedal must be kept simple to avoid musicians getting off the subject with too many options.

Even so, the Cinnamon Drive is a pedal that can cover a wide range of needs once you have become familiar with its possibilities and features.

So, here are some suggestions for you!

5 usefuls tips for your Cinnamon Drive

Yes, you are probably thinking it is an obvious thing to say, but you would be surprised to know the amount of times I’ve been asked for the Cinnamon Drive’s mode of operation even being specified at the manual. Take your time reading, try the suggested settings and you should do fine.

Here a link so you can take a look at it online.

2. Use internal adjustments to reach a new dimension

Even being explained at the manual, I think it is interesting to emphasize the aspects of having included this feature. During the development of the Cinnamon Drive we had many doubts deciding the values for the critical components used to define the circuitry’s sound. During the tests we carried out with trustworthy musicians none of them could manage to determine a specific value, so we decided to go all-in giving the option of tuning the Cinnamon Drive with enhanced tonal precision and saturation character. As we wanted to keep a simple control layout we incorporated them in the pedal’s insides instead of placing another switch or potentiometer.

As all pedals must sound the same out of the box, we defined an intermediate setting seeking to be as neutral as possible. However, that doesn’t mean it will be the most suitable option for your gear or technique.

For instance, if the Cinnamon Drive doesn’t happen to be the last pedal of your distortion chain I would recommend you keeping both DIP bass switches turned down. That will result in a decrease of bass saturation performed by the last overdrive pedal, increasing sound clearness. You will also attain a better mid-range response resulting in an even more “rocker” sound (at your own risk).

The treble control covers a wide range and allows you to obtain extreme sounds in a fuzzy manner, ideal for the studio! By the way, fear not changing these settings as you will just have to go back to factory settings for the pedal to sound like before.

3. Be prudent with the gain!

The Cinnamon Drive is a very dynamic overdrive pedal. It responds to your playing style, so the louder you play the more you will saturate the circuit, just like a real valve amp would do. Additionally, if you turn the guitar volume down the saturation will be reduced to a clean sound.

Setting the gain control too high will leave you with little margin to take advantage of those dynamics. So, I recommend that once you have found the setting you like you lower the gain control. You won’t notice much difference regarding saturation, but you will in terms of expression, as you will sound less compressed, enhancing the pedal’s sensitiveness towards your playing.

4. Tweak the Cinnamon Drive yourself!

The Cinnamon Drive’s heart is an Op Amp Burr Brown OPA2134, a chip designed specifically for audio which is several times more expensive than a standard one. During the designing process there wasn’t a doubt about the Op Amp being the better sounding amp; even so, we assembled it on a socket so it could be easily replaced in the unlikely event of malfunction, allowing the user to replace it with another Op Amp using the same pinout.

There are a great variety of chips that work on the Cinnamon Drive. The following list includes the ones which we have tested:

The list could go on for a while. Differences are subtle in some cases and obvious in others, but the unanimous winner was the OPA2134. However, we invite you to test for yourself if some other option works better for you!

5. It could have been named Cinnamon Boost

Despite being powered at 9V, we have integrated a circuit that will allow the Cinnamon Drive to internally work with symmetric power (+/-9V) which provides an enormous headroom. Thanks to this you can turn it into a clean two-channel booster! You just have to reduce the gain and boost controls to the minimum and the two volume controls will become the amount of signal amplification!

Be aware that the Gain control won’t saturate the signal at its lowest, so you can use the Boost to add volume or saturation, or both!

Even though the Cinnamon Drive isn’t an independent two-channel pedal, it could act as one!

I hope these five tips help you take full advantage of your Cinnamon Drive and if you have further questions you can always contact me via mail at support@aclam.cat