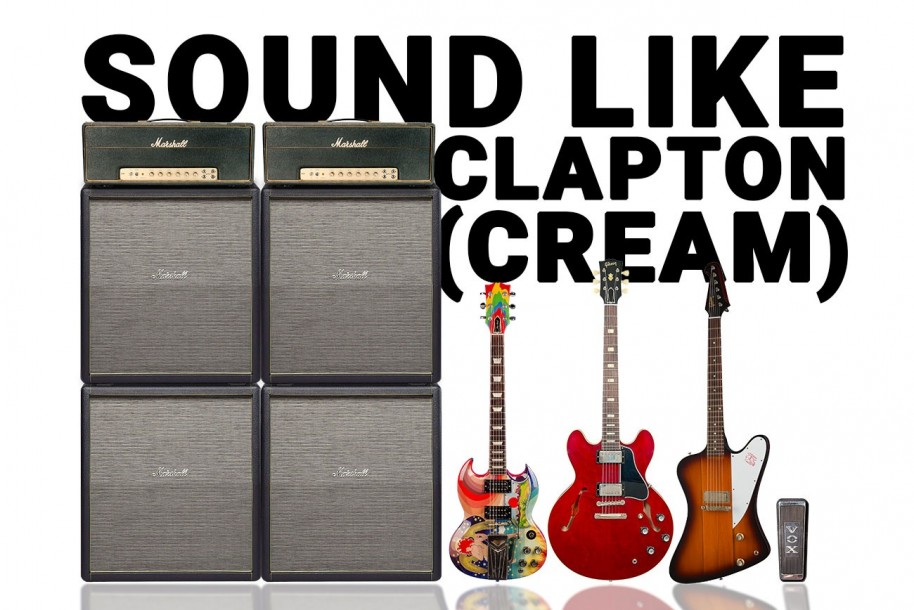 For some people, especially the younger generations, it may be difficult to understand the huge impact that Eric Clapton had on the electric guitar and modern music as we know today.

Eric Clapton, one of the finest blues guitarists of all times

From the early to mid-sixties, Clapton stood out as one of the finest blues guitarists of the British scene. He started as a professional musician with the Yardbirds, a phenomenal R&B combo. After a couple of years, Eric Clapton was dissatisfied with their commercial approach and left them to join John Mayall and the Blues Breakers. It was then when people really began to pay attention to this blues guitarist and "Clapton is God" graffities started to show up in London.

Later, by the end of the decade he achieved the status of guitar hero with Cream. In 1966, John Mayall and the Blues Breakers with Eric Clapton, were about to start a recording session for the so called “Beano album”. Clapton equipped with his now mythical Gibson Les Paul Burst and the Marshall 1962 combo, turned up the volume really loud, considering the standard on those years.The sound tech went crazy and begged him to turn down the volume. A young and not very talkative Eric Clapton responded with a plain: "No!".

Clapton just wanted to capture the same sound that was getting at the venues and pubs where they played all around England, where the amp was turned up full volume. By insisting to keep it like this, he started the sound that launched British blues-rock. Not bad!

Clapton used a circa 1967 Marshall 1962 model with the legendary Gibson Les Paul Standard, “the Burst”

Was Clapton the first Youtuber talking about his rig?

Some time ago, I was watching YouTube, and ended up with a long-haired Clapton with moustache, explaining how he achieved some of his trademark sounds. I thought this was so cool because Clapton seemed a guitar youtuber, showing his signature licks and talking about his gear, but this was 50 years before Rett Shull, Rick Beato or Paul Davids, just to name some well-known guitar youtubers.

Funny enough, on "The Beatles: Get back series" there is one scene where the fabs were casually chatting about the program they saw on BBC television the previous night. They mention this same video, which is part of the Cream Farewell film from 1969.

The Beatles didn’t see the appeal of a musician talking about their gear. I guess they were more into songs than gear. Fair enough lads.

An early example of 60’s youtuber before YouTube was even a thought.”

But anyway, this video triggered something in me, and I thought: "How great would be to have a Clapton-Cream pedal reminiscing of the Fool Gibson SG? But wait, we make pedals. It's what we do. We can make it!"

I quickly phoned my pal Marc Sospedra, the electronic wizard, and asked him: "How do you fancy a colourful pedal that can capture the Marshall Plexi tone, pay tribute to Clapton's era with Cream, and having the woman tone in it?"

Marc came out with a prototype really quickly, and I was completely stunned with the result. The Woman Tone was real.

I know some people don’t get it; they say you can get the woman tone easily with almost any guitar by just turning the tone down. So, what is the point then? To me, the point is that it is a great overdrive pedal that really captures the spirit of the Marshall plexi amps and the woman tone effect is really accurate. It has a bit of a booster which really helps your solos. And to have Marijke Koger making the artwork is really like a dream come true.

But, enough about us. To sound like Clapton, it is good to keep in mind that he was a blues fanatic, deep into the music of Muddy Waters, Robert Johnson, and Freddy King, just to name a few. So, it would be a good idea to steal first some of these blues legends licks to understand the inspiration that fuelled Clapton’s passion for blues and the electric guitar.

During the Cream years, Eric Clapton used the following set-up to get his particular sound.

How to get Eric Clapton's sound

Nowadays, in a real-life gig, to play with a rig like this would instantly make you the most hated person in the place. You could be proud and think that you have a phenomenal sound and would cherish the great sustain and how great it is when the tubes of your amp are really working. Ok, we all get that, but most of all you want to stay alive to play more gigs, right?

So here are a couple of tips to get a similar Clapton Tones and more important, to get along well with your band mates and even with the sound tech:

A good solution is to use a 10-watt or less tube amplifier. They can take you there and you don’t make people angry which is always a good idea.

Here are a couple of small tube amps where you could play at home or at the studio at bedroom volumes:

If you have a 50 or more-watt amplifier you can use an attenuator, allowing you to control stage volume without losing tone and feel. It's like a volume control between the amp speaker output and the speaker itself.

There are several examples like this Z-amp that could serve you really well:

Another interesting solution is a load box. A load box is a device that acts as an interface in which the energy generated by a tube amplifier can be expressed, without using a speaker cabinet. An amp head creates a lot of energy and power, which needs to go somewhere. The device “loads” the amplifier.

The Universal Audio OX Amp Top Box is a great tool that allows you to use your tube amp at the sweet spot, with several cool pre-sets of different cabinets and mic placements:

There was a time when there weren’t many pedals around. Can you imagine that? It's unbelievable how many different sounds Eric Clapton could get with just one guitar, by just using the volume and tone knobs. So, a good idea is also to explore that part of your guitar and make the most of it.

And that’s it! Thank you for stopping by and until next time!