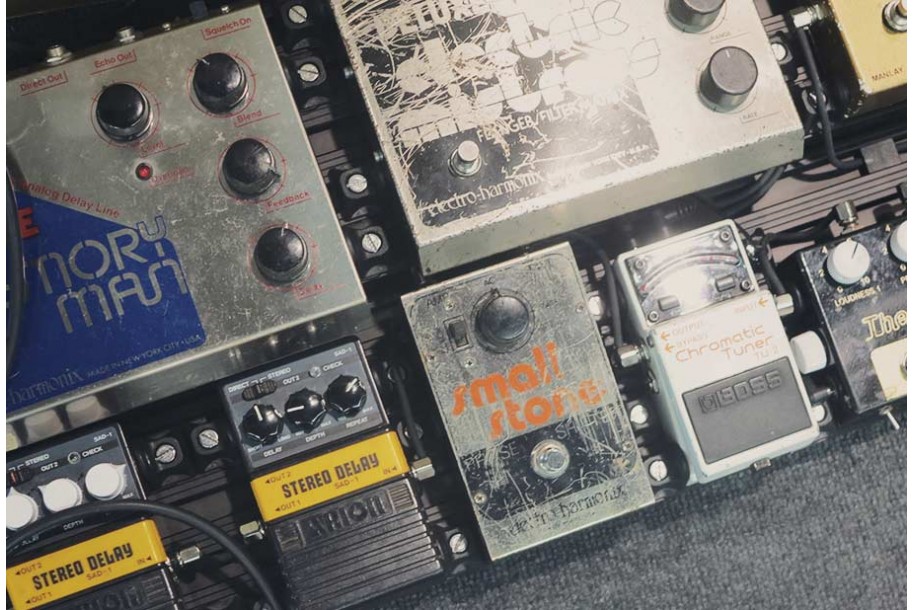 Nowadays, in what could be considered as the stompbox Golden Era, this might be a silly question.

There are plenty of options and accessories out there to set up the perfect pedalboard. Starting from the almost infinite effect pedal offer, both boutique and mass produced, to the different pedalboard structures, power supplies with isolated outlets and diverse voltages, solderless patch cables, etc.

Almost every professional guitar player has some kind of effect pedal in their rig and most of them use a bunch of stompboxes to shape their sound. We think of them as an essential part of our gear and we give them the same relevance as the guitar or the amp.

But all this madness is fairly recent. Some years ago most guitar players (and bass players too) didn’t even think of having a pedalboard. It wasn’t until the early 2000’s when all those products mentioned above started to crowd the net and music stores, attracting the attention of consumers of all around the globe.

So the question seems quite obvious as we approach the 5 decade mark of the apparition of stompboxes.

Why did we have to wait to the 21st century for companies to make accessories to set our pedalboards properly? We could state there isn’t a single answer to this question, but a sequence of events in music history which have led us to the current stompbox and pedalboard boom.

A BIT OF EFFECTS PEDALS AND PEDALBOARDS HISTORY:

Although the first stand-alone guitar effect unit (by standalone meaning that it’s not integrated in another piece of gear like an amplifier) dates from 1948, it wasn’t until 1962 when the guitar community started to use the term “effect pedal”.

The De Armond 601 Tremolo Control was the first commercial guitar effects unit. Although we cannot refer to it as a pedal as it was designed as a desktop unit, lacking a footswitch.

The same year Gibson released a new device for guitar named Maestro Fuzz Tone FZ-1, adverts from the time claimed that the FZ-1 could "create a sensational new effect never heard before". That was, as you would’ve imagined, a fuzz type distortion, the first one ever put on a pedal. Unfortunately for Gibson it wasn't a big sale success, but in 1965, Keith Richards from The Rolling Stones used one to resemble a horn in the "(I can't get no) Satisfaction" intro, one of their most famous songs which became Nº1 in USA and Europe. Gibson sold out all the FZ-1 units thanks to Keith (around 5000) and released the FZ-1A, a revised version with a quicker assembling process that would be able to supply the increasing demand (Gibson sold around 40.000 units of the FZ-1A between 1965 and 1968). Now the Maestro Fuzz Tone is recognized to be the first effects pedal of the history.

Those new sounds generated a great interest in Europe and during the following years many British companies took the initiative in pedal development. A good amount of new fuzz boxes appeared. In 1965 Sola Sound released the Tone Bender MKI (based on the Maestro's circuit) and in 1966 the Tone Bender MK1.5 and MKII. Other companies had their fuzz pedals like Selmer, Hornby Skewes, Wem, Marshall or Arbiter with their famous Fuzz Face.

In fact, the Fuzz Face was a relevant piece in the rig of one of the most ground-breaking guitar players of the history: Jimi Hendrix. Jimi showed the entire world that effect pedals could be chained a combined to create new sound effects. He was very innovative using the Wah wah, the Fuzz Face and one of the first modulation effects created, the Uni Vibe (some sort of a phaser-vibrato designed to emulate a Leslie).

We can hear his mastery on one of his most famous performances in 1969 in the Woodstock Festival. Specially on the song "Purple Haze" he combines the effects on different sections of the song to add motion and feeling to his sound.

Hendrix set the base for the next guitar players who were seeking for a signature tone and creating new textures with the electric guitar. Pink Floyd's David Gilmour was one of them, he's known to use delay (Binson Echorec), phaser (Mxr Phase 90) and fuzz (EHX Big Muff and Dallas Arbiter Fuzz Face) during the early to mid-seventies.

By the late 70's musicians around the globe adopted stompboxes for different styles of music thanks to the vast existing offer, making many effect companies find it's place in the industry.

Even so, products such as pedalboards, power supplies or special patch cables weren't developed by that time.

Common guitar players had 3 or 4 pedals so a special board to mount them wasn't that necessary. Most effect pedals run on batteries, had no dc input or were powered directly to the ac plug so a power supply with isolated outputs made no sense (there were exceptions like the MXR Power Converter)

Only rock stars could afford complex rigs, custom made for specific tours like the ones made by Pete Cornish or Rob C. Bradshaw. These integrated effect pedals in intricate systems with a lot of signal routing to different amps, stompboxes etc.

In conclusion, it seems like nobody worried about making proper solutions to give stompboxes a more prominent role in the guitar player's rig. Probably not enough time had passed for the different manufacturers to react to the musician’s needs with new products. What could have caused us having to wait for almost 20 years for the stompbox accessories boom?