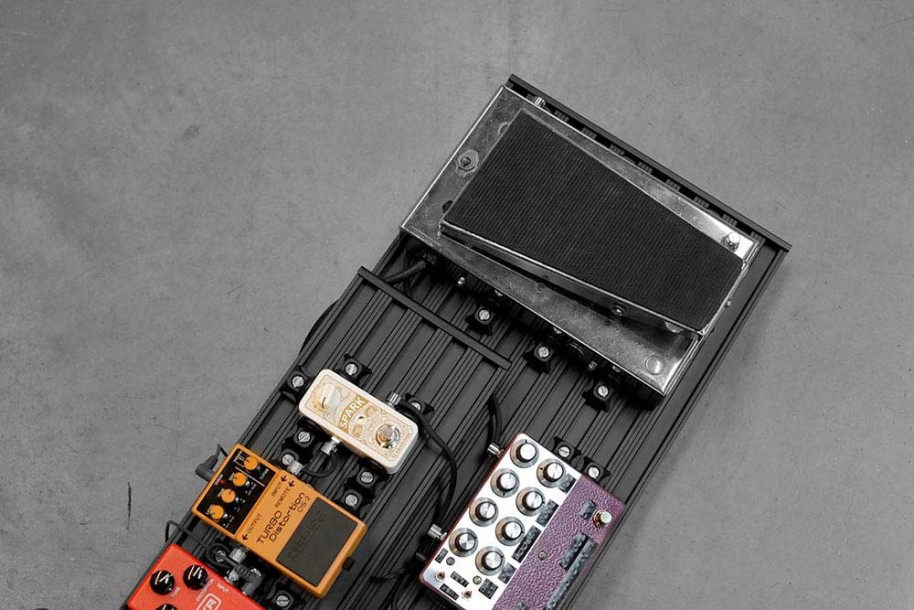 As we have seen through the history of pedals, a new decade leads to a new era in the guitar world.
The nineties were a very eclectic decade, there wasn’t a dominant musical trend at the time. There were significant bands in terms of sound personality; Rage Against the Machine with their rap-metal fusion, Red hot Chili Peppers’ funk-rock or Radiohead’s masterpiece Ok Computer, a pillar of alternative rock, proving that plenty of music was yet to be created and, what is more important, that you don’t need to adhere to the latest technology to innovate. Everything’s fair in music making.
Radiohead’s Johnny Greenwood himself, used a Digitech Whammy and an old Roland Space Echo RE-201 to achieve the tone he was looking for, something quite rare in the eighties. Such pragmatism helped boutique manufacturers to grow, as players started to look at them to find their special and unique sound.

GHOSTS FROM THE PAST

Unfortunately, all this revolution wouldn’t reach the average musician, resigned to carrying pedals in a bag or getting hold of a Zoom or Digitech multi-effects. Such multi-effects were the bridge between the eighties rack processors and effect pedals. Very popular during the nineties, most amateur and semi-professional musicians adopted this alternative which allowed to have presets and a broad variety of effects at a moderated price. The problem was that these multi-effect devices were digital and didn’t offer a great sound quality, altering the guitar’s tone into a boring and lifeless version of what it used to be.

Even so, at the beginning of the 21st century, two products changed the pedal world forever. Pedaltrain released the first aluminum structure that, with the use of hook and loop, allowed for organizing and keeping the set of pedals always assembled; which would make transportation and concert set up easier and quicker.
Its advantage was that thanks to offering a standardized product, pricing was much cheaper than a customized flightcase which was what professional bands were using until then. The second product was delivered by Voodoo Lab with its awarded Pedal Power. An isolated multioutput power supply allowing to power your whole effect pedals set with one device, simplifying and compacting your pedal system.
Even though these products had potential separately, the magic arose when both were combined. Pedaltrain and Voodoo Lab adapted their products to allow the Pedal Power to be assembled underneath the board. That was what triggered the current pedal fever that lasts until these days. Pedals had been around for long, but it wasn’t until then that common musicians would find them practical to use. Many players that felt tied up to multieffect units could now opt to use pedals live, without worrying about having to deal with many different power supplies nor harming the pedals during transportation.

At the beginning of the 2000s new bands with a different paradigm than the ones from the nineties appeared. Even though there were still traces of the 80s digital era during the 90s, since the 2000s, with the work of pioneering boutique and useful accessory companies, musicians focused on effect pedals. Bands as The Black Keys, Grizzly Bear, Queens of The Stone Age or The Mars Volta emerged on the scene during early 2000s with an utterly different sound from the nineties. Special and organic tones were delivered thanks to their analog pedalboards.

Finally, the stars aligned causing the pedal boom in which we live nowadays. The market was receptive again thanks to new bands that sought a more personal sound only pedals could offer. All this scenario caused the rise of boutique manufacturers which were already starting to be well-known, like Zvex and Fulltone, together with the opportunistic appearance of the first accessory manufacturers for pedals, like Pedaltrain, Trailer Thrash with their hook and loop pedalboards, or Voodoo Lab and Cioks with their power supplies.
Another key element that fueled this insanity was the Internet, which helped everyone to reach detailed information related to favorite musicians’ gear and latest pedal novelties. First Youtubers like Andy of Pro Guitar Shop or Gearmandude helped to spread the word of pedals all around the world.

During the first decade of the 2000s the industry kept on growing. Existing brands had become established and many new ones started to take their first steps. It was the time when many brands which are now quality references were founded. Names such as JHS, Earthquaker Devices or Death By Audio gained strength during the 2010s and are now the most cutting-edge companies in the industry.
Additionally, leading digital effects companies were reinventing themselves, like TC Electronic or Eventide, adapting their effect rack algorithms to the pedal format. Eventide’s Factor series or TC Electronic’s Tone Print have become referents in the industry.

Accessories were not left behind and during the mid-2010s companies like Temple Audio, Chemistry Design or ourselves as Aclam Guitars, started to offer alternatives to Pedaltrain’ s hook and loop system. Power Supply options in the market also grew like mushrooms, having T-Rex, Strymon, MXR, Walrus Audio and a long etcetera. Cable manufacturers wanted their share too, leading to improvements in the form of solderless patch cables designed specially with pedalboards in mind; brands like Evidence Audio or Lava Cable would come up with this sort of George L’s system. All kinds of accessories appeared such as Option Knob, Barefoot Buttons or the Pedal Flex.

To conclude and going back to the initial question of why a pedalboard… why not!? It’s the best moment to build one up, there are endless pedal, pedalboard, power supply and cable options in the market, covering every price range possible. History has proven that effect pedals are one of the best means musicians have to find inspiration and to approach a more personal sound.

Whatever is to come will definitely be better as digital technology keeps evolving and improving. Thanks to companies like Strymon, with their last generation algorithms, or Chasebliss Audio, with their blend of analog pedals with digital control, the new wave of effects is being led to have versatility as its main feature.

We will soon find out!