Dr. Robert Effect Pedal · Based on the VOX UL730

The most accurate replica of the original VOX UL730

We're sorry! This product is not available at this moment!

Enter your email if you want to be notified when the product becames avaiable again.

Dr. Robert pedal is the most accurate replica of the iconic VOX UL730 amp. Made famous by The Beatles as they used it on Revolver & Sgt. Pepper's albums. Also used by The Rolling Stones, Jimmy Page or Joy Division... Only 100 units of this amp were produced and most of them were destroyed. Klaus Voormann (Revolver's cover album designer) has created the artwork for the Dr. Robert pedal.

If you are curious about why and how we got here, we strongly recommend you watching our 6 episodes documentary in our Youtube channel talking about all secrets behind the Dr. Robert effect pedal. 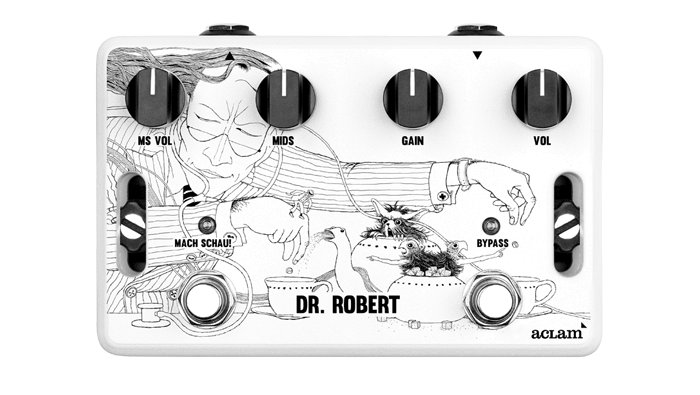 The Dr. Robert is based on the Normal channel of our Vox UL730 S/N: 3042. We traced the original tag board circuits, measuring each component's type and value so we are 100% sure this is the closest you can get to the rarest Vox amp.

The pedal also works with the same voltage the original amp does, the circuit takes the 9VDC and converts it to 18VDC.

Klaus Voorman, designer of The Beatle’s Revolver album cover sign the artwork for the Dr. Robert.

Get more saturation with an independent volume control. Use it in solo parts to raise the volume or just to have more distortion with the same volume.

"Mach Schau!" was shouted by the businessman from one the Hamburg's venues when The Beatles resided in Hamburg when energy fell flat, and they had to put on more of a show.

Our pedals use a custom enclosure designed to match perfectly our Smart Track® pedalboards. Using the side thumb screws you will attach and lock the pedal into the pedalboard, with no risk to loose it or to get robbed easily.

It also comes with a high quality Velcro® pad so you can use it on any other pedalboard in the market.

The VOX UL400 series (designed for bass) almost have the same circuitry than the VOX UL730 preamp.

We tunned the FET circuit so Dr. Robert sounds flawless with bass too. No low-end drops resulting in a great preamp and distortion tool to plug directly to the desk or into an amp.

The original VOX UL730 had a 3 band eq: Middle, Bass and Treble. The Mids control is a unique feature to shape the particupar sound of the Dr. Robert pedal, but we didn't want to let you down in terms of tone shaping.

Bass and Trebble controls found on the original VOX UL730 are on the inside of the pedal.

You will find the finest and closest components to the original amp on the Dr. Robert: Carbon comp resistors, Nichicon Fine Gold and Wima caps, Alpha pots makes the Dr. Robert a reliable pedal with a superb tone.

You'll never get any signal interruption even if your power supply or battery fails. It constantly monitors voltage supply and switches itself to true bypass when it detects a drastic drop in voltage.

It also tells you when the battery is close to completely draining by making both LED's blink.

What customers think about this product?

For anyone in search of that authentic Beatles '66 sound, this pedal is fantastic! I am very thankful for this, and for all the hard work and effort that went into making it the right way. The Klaus Voormann illustration is just the icing on the cake.

If you play Beatles music this pedal is a must have. The sounds are spot on and you can’t get them anywhere else. I don’t know how the aclam engineers and designers do it but this pedal is magic.

Finding the right guitar tone to recreate the magic the Beatles managed to achieve in the studio, with the help of George Martin and Geoff Emerick, particularly on albums like Revolver and Sgt. Pepper has never been easy. Thanks to this little masterpiece born from the passion of Marcel and Marc of Aclam, I found myself having a VOX UL730 at home and I discovered that the real heart of those sounds was in the amplifiers they were using. Thank you guys for this wonderful surprise and for giving me the possibility to add the right color to the sound that I have had in mind for a long time. ????????

Just What the Doctor Ordered

This pedal produced insanely useful tones with great ease. The mids knob can really influence the way my guitars break up in a way that other distortions I've tried do not. The user manual is very informative. The pedal is built like a tank. And the Klaus Voormann artwork is the perfect final touch. Well well well, he'll make you: Dr Robert.

Rhythm Guitarist for The Raves

Let me start by saying I am not a gear head or pedal junkie. But ever since I heard this pedal a couple of years ago I wanted one... and I love it.
Vox amp lovers know the company missed the boat when it came to giving them the sound from their mid sixties groundbreaking hybrid UL700 series of amps. They were originally made for an exclusive clientele including the Beatles and The Rolling Stones, and only 20 or 30 are know be in existence today in the hands of collectors willing to pay exorbitant prices. Luckily the folks at Aclam guitars in Barcelona, Spain managed to buy a UL730 and reverse engineer the main channel to create their Dr. Robert pedal.
If you love the unique guitar sounds from the Beatles Sgt. Pepper/Magical Mystery Tour and even the White Album period as well as The Rolling Stones Between The Buttons, Satanic Majesties and other 66-68 recordings and Jimmy Page’s sound on the first two Led Zepplin records... this is for you.
It isn’t a one trick pony or a gimmick by any means though. It is very responsive to individual playing and can be tweaked endlessly to create new sounds.
I’ve used it in a few recordings to get a chunky rhythm guitar sound as well as lead tones that easily cut through a mix.
By watching some YouTube video demonstrations and using the excellent User Guide, you can dial in sounds that you won’t find with other devices.
I suggest having a listen to the guitars on the albums I noted and you’ll see why this pedal isn’t like anything you may have.
It will be well worth getting and it’ll be hard to stop playing through it.

This pedal is amazing !! I ran it through a marshall dsl40cr and it just sounded stellar???????? It also plays great through the vox mini super beetle ... from suttle glossy chime to solid grit this thing is great
Hopefully ACLAM can do a series of these rare classics ????????????????

I bought the pedal through online store. Customer service is very responsive and friendly. The delivery via Fedex was faster than expected. I played with the pedal non-stop after receiving. It is a faithful recreation for the tone as promised by Aclam Guitar. Well done and a must own pedal for any fans!

Sure, there is the direct Beatles influence in designing this pedal, which is part of what made me get it, but there is really much more.

Ive always loved those sounds on Revolver and Sargent Peppers and never knew what was going on for the fab four to be able to get their guitars to sound like that. Now i do and i have a pedal that goes a sincere way to getting mine to sound like it too.

Really though, for me, this is just a great distortion. I have enough screamers and overdrivers that do so well what that tradition of effect wants to achieve, but it also gets boring, and many alternatives can be exciting within a small range and then its just too much or plainly mud. The Dr Robert doesn't suffer from that in the same way. There a much wider range of sound and possibility outside of the usual screamer domain that i'm falling deeper into use with it every day.

When i first got it, all i could think about was Beatles sounds and grooves, but now i;m over that and using the pedal as my own sound treatment, stacking it with my other pedals and playing anything i like. I actually havnt thought about the Beatles in regard to the pedal for a while....... im just making music and i really appreciate this pedal for what it does within that.

It seems like a lot of money for a distortion pedal but it offers something different and it's very well made. You have to remove the back to access the battery compartment, which is time-consuming, but you get to see the very neatly assembled circuitry. The sound is crunchy and refreshingly retro, a bit like a TS9 with the tone control on max, but with even more attack. This pedal isn't "polite" - it's raw and aggressive and rock and roll and I like it!

It’s rare that I buy a pedal that gets more than occasional usage. Especially overdrives. This one, however, is So good it could be constantly engaged. With the eq function it is really versatile

Another great pedal from a company that exceeds customer expectations.

Sounds amazing and works great. Have yet to run through all it’s paces. Very easy interface. No retreat on this purchase

I’m giving this product a five out of five.
The sounds are extremely authentic and paired with the right pick ups it’s dead on perfect.
The packaging is fantastic and the box comes with beautiful touches and a special pouch also drawn by Klaus V.

Beautiful pedal! Really gets the 7-series sounds I've been chasing all these years. Aclam customer service is excellent!

This is an amazing Pedal. Authentic & Versatile. Blown away.

Product specifications may change on occasion, our policy is to continually improve our products. Aclam Guitars reserves the right to change any price or specification without prior notice.